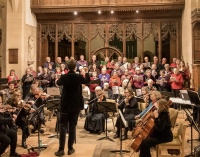 Originally planned to take place last year as a celebration of the 250th anniversary of Beethoven’s birth, this concert features Dexter Drown conducting East Oxford Community Choir and Orchestra in three works by Beethoven, all written in the period 1807 to 1808, the Coriolan Overture, the Mass in C and the Choral Fantasy. The Coriolan Overture was written for a tragedy based on the life of the Roman general Coriolanus and is followed by the rarely-performed Choral Fantasy, a work for choir, orchestra, soloists and the wonderful Maki Sekiya as piano soloist. The Choral Fantasy includes variations on a theme more familiar in its later version as the Ode to Joy in the last movement of Beethoven’s 9th symphony. The Mass in C was the first of only two masses written by Beethoven, the other being the Missa Solemnis.