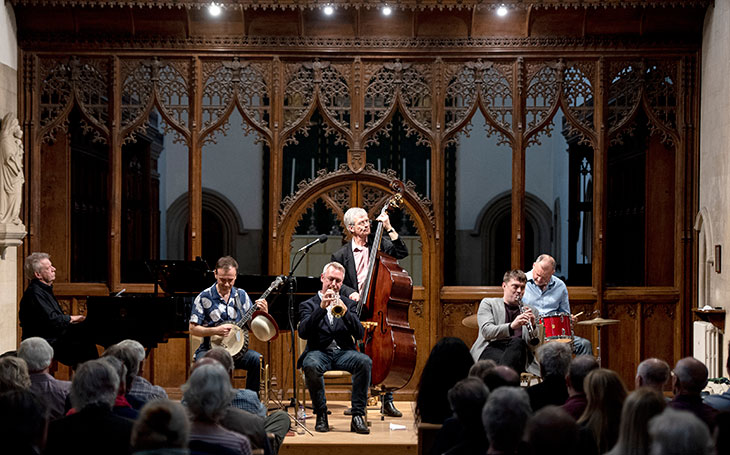 Does New Orleans jazz belong in church? This is an opportunity to hear traditional jazz in a gospel concert setting!

Making a return visit to SJE Arts, this band celebrates the great New Orleans clarinettist George Lewis with music inspired by his album “Jazz at Vespers” recorded at the episcopal church in the appropriately named Oxford, Ohio. His band was the leading traditional jazz revivalist band at the time, comprising veterans who had all been in on the birth of the music, focusing on the spirituals and hymns that had been part of the jazz from the start.

This band, led by BBC Radio 3’s Alyn Shipton, and featuring clarinettist Adrian Cox who has also played at SJE with his own band, comprises musicians who have all spent time in New Orleans learning from the founding fathers of the music. In this concert they will re-explore the repertoire that Lewis made famous, from lesser known pieces such as “Sometimes My Burden Is Hard To Bear” to old favourites like “Down By The Riverside” and “Lord, Lord, Lord, You Surely Been Good To Me”. And just like the Lewis band of the ’50s, Alyn’s jazz friends play entirely acoustically without amplification. The music runs the full emotional range from soft, contemplative pieces to joyous outpourings of the infectious rhythms of the Crescent City.

From the review of the band’s previous concert at SJE Arts
“as the band received their entirely deserved standing ovation, some of the audience whooped for more as if it were Saturday night at the Bullingdon” Amelia Gabaldoni, Daily Information