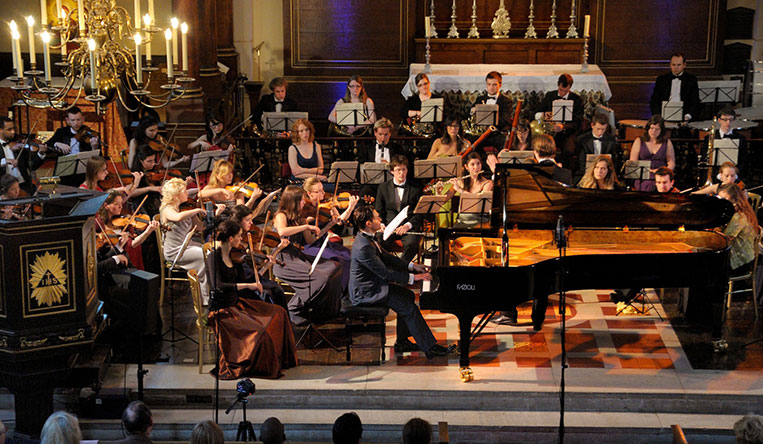 Arvo Pärt Cantus in Memoriam Benjamin Britten
Grieg Piano Concerto in A minor
Dvořák  Symphony No. 9 in E minor ‘From the New World’

An evening of beautiful orchestral music, performed by some of London’s most talented young professional musicians. Marc Corbett-Weaver joins the orchestra for Grieg’s only, and lastingly popular, piano concerto.

Marc Corbett-Weaver has performed in London, across the United Kingdom and in Italy, Greece and Austria. Concert highlights include Rachmaninov’s Piano Concerto No. 2 and Tchaikovsky’s Piano Concerto No. 1 at London’s Cadogan Hall, touring Mozart Piano Concertos in Austria with Kammerphilharmonie Graz, and recitals at venues including St Paul’s Covent Garden, the Holywell Music Room and Jersey Opera House.
Marc is the founder and director of the Orpheus Sinfonia and London Firebird Orchestra and he has successfully relaunched the annual London concert ‘The Story of Christmas’.

London Firebird Orchestra is composed of talented players making the transition from one of the London music schools into the profession. Regular concerts take place at St George’s Hanover Square in Mayfair (Handel’s Church) and the orchestra has also performed at the Royal Festival Hall, Queen Elizabeth Hall, Kings Place, the Bath Pump Room, SJE Arts in Oxford and The Actors Church in Covent Garden.

Conductor Michael Thrift has been working with the London Firebird Orchestra since 2014. He has also enjoyed projects with the City of Southampton Orchestra, Cheltenham Festival and Oxford University Sinfonietta and is Associate Artistic Director of the award-winning Fulham Opera.
Originally from Australia, Michael studied composition alongside conducting at the University of Sydney and he has a particular focus on contemporary music and composers, from workshops and performances with the Dr. K Sextet at Cheltenham, to the Firebird Young Composer Award.

Sponsored by the Morris-Venables Charitable Foundation